A brand new version, more powerful than ever, for hard drive performance faster than ever so you can continue to experience a Windows® PC where everything just happens faster!

We’re pleased to announce the new Version 6 of the single most powerful defragmentation and hard drive optimization software on planet earth…. UltimateDefrag.

You now have more power and flexibility than ever before for keeping your hard drive not only defragmented but also optimized for absolute maximum performance possible. All other defragmentation software only defragments… which is only part of the hard drive performance degradation equation… the other two more important causative factors are 1. “where” on the drive your files are and 2. how “scattered” your files are relative to each other.

UltimateDefrag is the only software product addresses all three causes of reduced hard drive performance to make your Windows PC, as well as all your favorite sims and applications, perform at absolute maximum performance possible from a file access point of view…. up to four times faster than “factory averages” and with one of the new features, six to eight times faster! This raw performance increase is real!

At the file level, your hard drive might be a mess like this one. Use UltimateDefrag 6 to defragment and optimize for fastest hard drive performance possible.

UltimateDefrag6 now gives you more available space on your hard drive and an average of 50% faster file read performance on regular mechanical hard drives. NTFS compressed files read faster because today’s processors can decompress files faster on-the-fly than the hard drive can read them. e.g. it is almost twice as fast to access and decompress a 1 GB compressed file than it is to access its 2 GB uncompressed version.

On what are still high cost per GB Solid State Drives, you get slightly slower read performance on NTFS compressed files, but you can get an average of 50% more space on your SSD. A 1 TB SSD will be able to store around 1.5 TB of compressed files.

UltimateDefrag gives you ultimate flexibility on choosing your files for compression using folders and filenames, usage frequency and wildcard file selection or even just by selecting a file from the cluster viewer or defrag explorer. Optionally compress your files while you defragment them. Our proprietary SmartCompress™ option instantly analyzes a file for compressibility and doesn’t waste time trying to compress files that can’t be compressed, This saves so much time over native command line compression functions.

You can also perform compression functions from the Command Line Interface with much more flexibility and functionality than the Windows Compact command.

Not everyone will use the compression features but for those who want the faster performance and/or more space on your hard drive, you now have the option to do so.

We’ve added new methods of defragmenting your hard drive such as being able to divide your drive into virtual zones. We’ve also added the ability to compress as you defragment, compress files that are archived to save space or moved to High Performance for even higher performance. Other methods have been enhanced and include a feature to reduce strictness of sorting for faster defragmentation times while rearranging your entire hard drive. The fast Fragmented Files Only method gives you advanced options that let you prioritize which files are given priority which enables you to defragment really quickly and better pack the files for both better performance and less free space fragmentation. 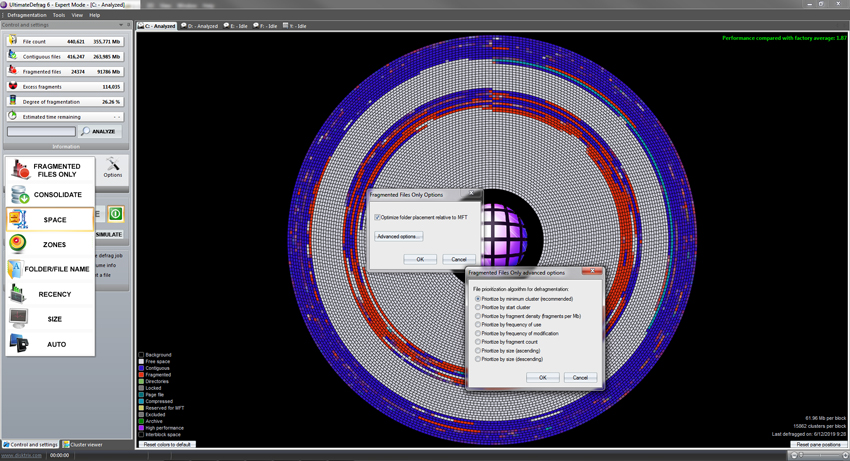 Is a very powerful way of selecting and sorting files for defragmentation. You can browse and sort the fragmented files on your hard drive 10 ways and you can select and defragment a select a group of files. For example you may only want to select and defragment the files you used in the past 7 days. Just sort the list, click and then select Defragment Now. Only those files will be defragmented.

The Absolute Easiest Way Ever To Defragment Files In A Folder!

Just go to Command Prompt. Navigate to a folder/directory. Enter the command UltimateDefrag *.* and every file in the folder/directory will be defragmented. Usually in just a minute or two. For subdirectories/subfolders just enter UltimateDefrag *.*\ and all files in all subdirectories will be defragmented. For users who are familiar with creating batch files, you could create a batch file that runs daily in a schedule to defragment all the files in your Windows Directory to keep your Windows tuned for fastest performance – all of the time! You could do the same for your Program Files folder etc etc.

Just installed some new software? Go into its folder and enter the command UltimateDefrag *.*\ and in a few moments your new program will be defragmented and ready to run with better performance right from the word go. Many PC users have no idea that installing new software installs it with many, sometimes tens of thousands, of fragments.

Of course you can also use the UltimateDefrag main program or even within Windows just right click on a folder to defragment from right within Windows Explorer itself.

Need to chip away at a large heavily fragmented drive?

If you have a large 4 TB drive with millions of fragments and don’t want to try to defragment it all at once (which could take many hours), you can set UltimateDefrag to defragment for any amount of time e.g. 1 hour and then exit the program. So before you shut down your PC for the day, you can start the defragmentation run, set UltimateDefrag to run for 1 hour and then have it exit the program and put your computer to sleep. Just do this everyday for a few days and your drive will eventually be completely defragmented and performing as fast as it should be.

Very accurate analysis of expected performance from your hard drive

UltimateDefrag6 performs a complete analysis on file use frequency and the current file layout to give you an intelligent and accurate assessment of the expected performance you will achieve based upon the current drive status.

The improved interface corrects a few bugs and produces a better outcome for your system file defragmentation. No other product anywhere on planet earth enables you to defragment and custom-place these NTFS system metafiles.

Many other fine tweaks, new features and enhancements

We’ve left no stones unturned in giving you absolute ultimate functionality that you would want in a defragmenter and hard drive performance optimizer and have introduced numerous other tweaks and enhancements and improved functionality. This version has evolved UltimateDefrag into as optimal a product as it can be in enabling you to realize the maximum performance possible from your hard drive. UltimateDefrag is Nirvana for system tweakers. You can squeeze literally every millisecond of performance out of your hard drive!

The most important thing is left untouched…. the graphical user interface.

There’s nothing worse than upgrading to a new version of software and it looks and works nothing like its predecessor. This is not the case with UltimateDefrag. The user interface introduced in version 3 was optimal for the program and Version 6 maintains that optimality. You are using the same familiar product graphical user interface with most information essential to operating the program accessible from the one main screen.

We are very proud to be able to take ultimateDefrag to the summit of its evolution to enable you achieve what you want the most from your hard drive, and that is maximum performance! UltimateDefrag Version 6 gives you all the capability to achieve just that. It’s the only software product in the universe as we know it that fully addresses defragadation of hard drive performance as it relates to fragmentation and file placement. Remember fragmentation is only 10% of the performance equation. File location on the platter and seek confinement account for the other 90%. Hard drives have optimal disk scheduling algorithms to make them more efficient. UltimateDefrag further increases, tenfold, the efficiency of those algorithms.

UltimateDefrag Version 6 is priced at only $29.95.

UltimateDefrag works with ALL versions of Windows® from XP through to Windows 10, 32 bit and 64 bit, and server editions too. Works with all hard drive configurations such as RAID, internal hard drives, external USB hard drives, flash drives, SSDs and works on virtual machines too!